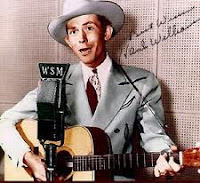 It wasn't until the early morning of New Year's Day, 1953, that anyone realized that country music great Hank Williams was dead. Williams' driver Charles Carr was taking Hank Sr. from Knoxville, Tennessee, to Canton, Ohio, for a New Year's Day concert. Carr knew that the singer hadn't moved for hours in the back seat of the car but did not realize that the country icon was dead.
Williams, after all, was sickly and had long-term drinking and drug abuse problems. It wasn't unusual for him to be found passed out. But when Carr finally checked on Williams in Oak Hill, West Virginia, the singer was cold, blue and stiff. He was dead, at the age of just 29.
Official documents, naturally enough, state that Williams died on January 1, 1953, but the exact time of his death (and where he actually passed away) has been shrouded in mystery for years.

Hank on You Tube http://www.youtube.com/watch?v=OxB1t2EEK0M
Posted by Keith Luckey at 05:11