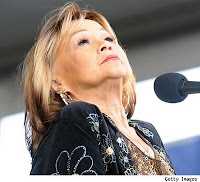 Four-time Grammy Award-winning R&B vocalist Etta James is currently undergoing treatment for leukaemia and has been diagnosed with dementia while her family wrestle for control of her estate.

According to the Associated Press, James' Beverly Hills physician, Dr. Elaine James revealed in court documents that the 'At Last' singer is unable to sign her name and needs assistance with feeding, dressing and hygiene.

In February 2008 the Rock & Roll Hall of Fame inductee granted power of attorney to sons Donto and Sametto James, and Donto's wife, Christ.

While Etta's son is asking a third party to control her assets "to avoid present and future family conflict and discrepancies," a court hearing set for today (Jan. 14) in considering Mills' request to transfer James' assets to a joint account so that he can monitor her spending.
The legendary At Last singer, who has battled heroin addiction, has been out of the public eye since early 2010 when she was admitted to hospital.  She became ill while in a detox clinic for treatment to an addiction to painkillers and other medicines
Posted by Keith Luckey at 11:51