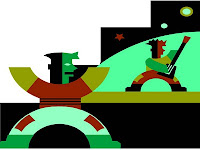 MTV reports that 2010 wasn’t a good year for rock fans, as just three of the year’s top 100 singles were classified as rock.

And 2010’s top rock seller, Journey’s Don’t Stop Believin’, was only there thanks to a pop remake. The track was originally released in 1981 and re-entered the charts after it was covered on Glee.

Not surprisingly, it’s hip-hop and R&B that are taking the market share, accounting for 47 of the year’s top 100 tracks. Forty hits were classified as pop, the remaining 10 were dance music.

Rock fared better on the album chart, with Mumford & Sons’ Sigh No More album the year’s 10th best seller. Overall, rock albums made up 27 of the top 100.
See Mumford and Sons @...
http://www.youtube.com/watch?v=_KCg_QEHtkY
Posted by Keith Luckey at 11:27