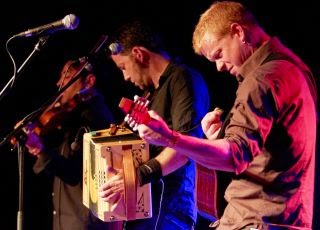 Nominated in the 2009 BBC Radio 2 Folk Awards, the Faustus triumvirate are 3 of the leading lights of their generation: Saul Rose (Waterson:Carthy, Whapweazel), Benji Kirkpatrick (Seth Lakeman Band, Bellowhead) and Paul Sartin (Bellowhead, Belshazzar’s Feast). They have a plethora of experience between them, brought together here in a virtuosic display of musicianship and testosterone. Rooted deeply in the English tradition, in 2007 they received a 75th Anniversary Award from the English Folk Dance and Song Society.

Check out this link http://youtu.be/eh3nI49tWaM